Greta thinks your Brand Purpose sucks (and probably so do you)

It's Greta and she looks unimpressed.

Greta’s gonna get ya

Does Greta have a Purpose? Yes, of course she does, but probably not one a modern marketer might recognise. Because Greta has intent, she gets stuff done and is not just about cheap sloganeering (ok, well maybe some).

However when it comes to Brand Purpose, Marketers really need to get their act together - and fast. The kids may be glueing themselves to their school bus today, but soon they’ll be coming for you. And I’m sorry, Marketers, but your carefully crafted Brand Purpose isn’t going to save you.

Is Brand Purpose fit for purpose?

Some notable exceptions aside, Brand Purpose has largely failed. Despite lofty ambitions and a lot of expense and hot air, execution has usually been poor, consisting of insipid campaigns rarely backed up by any solid action.

Waste of money aside, this failure creates a problem. The lack of impact puts other brands off because the received wisdom in the Marketing echo chamber is fast becoming that “Purpose doesn’t work.” So much so, that we are getting to a stage where Purpose is almost becoming counter productive. But however you choose to dress it up, the sentiment that lies behind it is hugely important and does have an impact on the bottom line. Here’s why.

What is business for?

Business is not about shareholder value first and foremost, but about meeting peoples’ needs. Do that well and shareholder value will follow. Unfortunately, too many businesses have forgotten this. Too many focus on shareholder value while wilfully ignoring any negative externalities associated with their activities. The result is that non-reusable plastics, pollutants, zero hours contracts and so on proliferate. All of which may improve short term profitability while at the same time generating a whole new set of needs for consumers. This collateral damage has the power to undermine not just your business, but our whole way of life.

Most marketers are familiar with Maslow’s Hierarchy of Needs. And while many quite rightly point out that humans don’t necessarily work in such simple ways, it is nonetheless a useful blueprint of our societal needs. 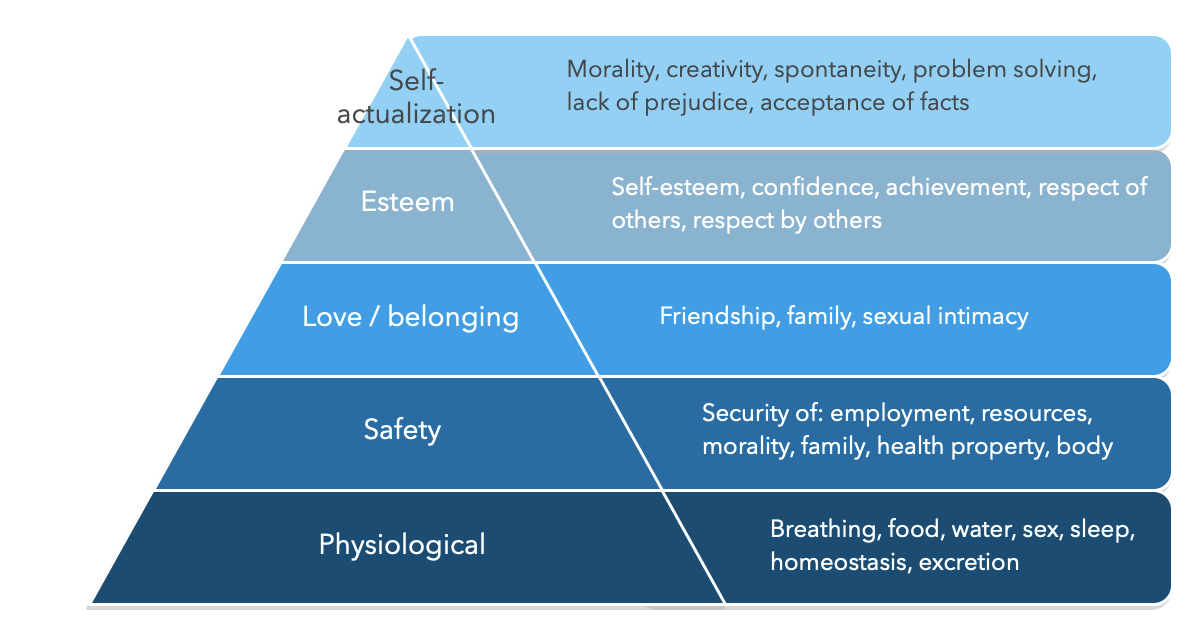 Many businesses centre their brand building efforts around the upper levels of Maslow’s pyramid. Buy my brand and you will be popular, feel great, get laid - hell - probably all three. Much of the thinking to date has been based on the assumption that the lower levels of this pyramid are relatively stable and human needs are increasingly moving up the hierarchy.

But as we have noted earlier, this is not the case.

The inconvenient truth is that our headlong rush to self-actualisation has caused an erosion at the bottom. We are too busy taking selfies and worrying about our social value while at the same time dangerously ignoring the foundations upon which our higher needs are built.

Where does customer experience begin and end?

The big marketing story over the last few years is the rise and rise of customer experience. But this should not be confined solely to our immediate experience of a brand. It should also include the sum total of all the activities of that brand. This means going beyond the shopping experience to encompass the manufacturing process, materials, distribution as well as the environmental and social impact. Don’t sell me fresh natural spring water, if in the process you are emptying out precious aquifers and contributing to drought conditions for millions. Customer-centricity has to exist at every stage not just either side of the cash register. This failure to act responsibly is an enormous act of self harm which is now starting to catch up with us.

But this realisation isn’t new, way back in 2012 Patagonia launched The Footprint Chronicles.

This is a site that openly lays bare all the negative externalities associated with their production process. The goal was to be open about these issues and turn possible confrontation with customers into a conversation. Here's a short video with a bit more detail.

Doing this has clearly not negatively impacted Patagonias’ business. If anything, Patagonia continues to grow from strength to strength. In 2011, a year prior to the Footprint Chronicles, Patagonia actually ran ads in the New York Times in the run up to Black Friday asking people NOT to buy their products and instead recycle or repair their existing garments. Ironically, the more Patagonia campaigned on an anti-consumerist message, the more people bought its products. Sales increased about 30% during 2012, to $540 million. 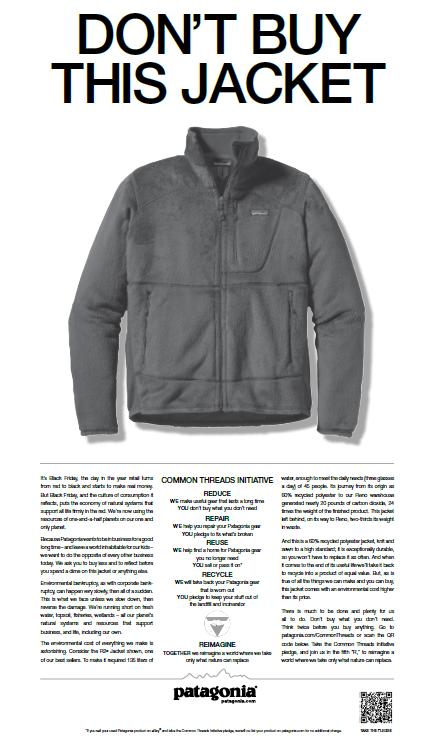 The impact on choice

Failure to tackle these externalities, ultimately impact choice. It does this in two main ways. First of all, people are increasingly starting to consider environmental and sustainable issues when making purchases. But more importantly, the continuing squeeze on incomes and quality of life means that people are becoming far more price-sensitive and simply don’t have the luxury of choice that they once had. Unless a compelling case can be made as to why your brand is better, or more purposeful, people will usually opt for the value option irrespective of your Purpose.

So your approach must amount to more than just generic sloganeering. It has to actually mean something. It has to make people feel that by selecting your brand they are becoming part of a tribe. To achieve that means whatever you say must be backed by authentic action. To do this well, you have to move beyond the generic Purposewash and gain deep insight into what people care about and crucially how that relates to your brand. That means understanding culture.

We are all familiar with the well-trodden successes for Purpose such as Nike and Patagonia. Equally the failures like Pepsi with their Kendall Jenner campaign. But the fact is that Purpose has moved beyond a niche positioning and thanks to the likes of Greta and Extinction Rebellion this has moved into mainstream culture and if brands want to be relevant they have to take on a point of view.

To illustrate my point I would like to move away from the usual suspects and instead offer a somewhat more prosaic example. The humble Greggs Vegan Sausage Roll.

There are any number of cultural reasons why people might choose not to buy the standard pork sausage roll. They could be concerned about animal welfare, the planet or there could be religious reasons. But Greggs successfully understood the cultural trends growing around plant-based produce. So at the start of Veganuary 2019 this highly unlikely champion of plant-based diets launched their vegan sausage roll and for additional good measure spectacularly trolled Piers Morgan into helping them to market it. 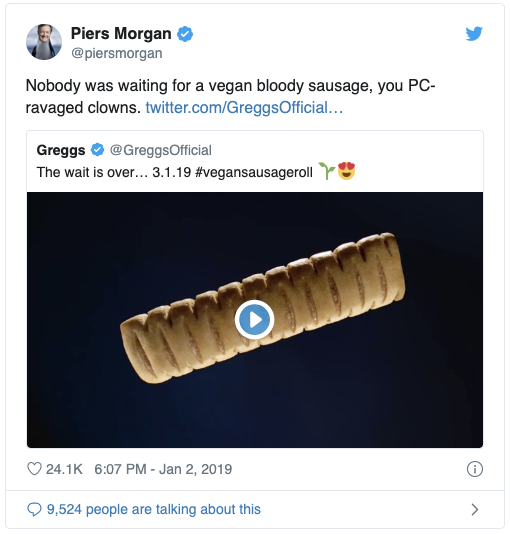 The result was a resounding success. Not only did Greggs gain a ton of publicity and sales while doing something positive, but by creating something genuinely delicious, they also opened up their product to a significantly wider section of customers with only 14% of purchasers actually being vegan. Greggs have now followed up on their success for Veganuary 2020 with a Vegan Steak Bake. And this year nearly every other food brand has fallen into their sausage-free slipstream with their own far less heralded offerings.

And the result on the bottom line? According to the Guardian, Vegan Sausage rolls are now one of their top 10 best selling products and sales overall for the brand have soared over 13% for the year.

The impact on their stock price has also been impressive.

It’s not that Purpose doesn’t work, it’s more a case that poorly conceived and executed Purpose doesn’t work. But you don’t have to be a Nike or a Patagonia to be able to make a difference. Greggs did it with a packet of Quorn, plant-based pastry and some deft social media trolling. Ultimately, those brands who understand culture and can align successfully with it, will win. They can also build a cultural moat around their business and ensure they become the ethical leader in their category.

Greggs deftly aligned the rise in culture of plant-based eating to service a new and growing need in a very price-sensitive market. They realised that sustainability is not just for the middle classes but for everyone. Most importantly, they invested in product development first and rather than wasting huge sums in an expensive marketing campaign they demonstrated a clear understanding of their Gen-Z target market and deftly built brand awareness by trolling Piers Morgan. As a result, a very unlikely brand practically owns the conversation around veganism for a large section of society. Customers didn’t have to pay a penny more and every other food brand is piling in behind them to nowhere near the same impact.

Culturally speaking, Purpose is no longer niche. The sentiment has crossed the chasm and entered the mainstream. Purpose is culture and will most likely be one of the biggest conversations of the coming decade. So getting it right presents an enormous marketing opportunity for those that do it well.

So the next time someone says that Purpose doesn’t work - think of Greggs. They showed that a solid understanding of culture, backed by affirmative action and some excellent social media chops can drive huge rewards.

So learn from their example, but don’t blindly copy them. And you never know, it might keep Greta off your back. Well at least for now…..

Discover your brand's unique voice in culture through our AI-driven audience intelligence. Get in touch to speak to one of our strategists.